My Phone call from Uncle Ed~~

Oh Hi, Uncle Ed!! I miss you so much *sigh*
You miss me too?
I sure thought that you were coming a few days ago when the kids were going to your house and then found out it was just a joke. MAN!!! 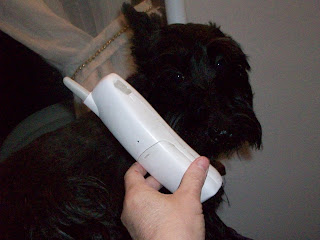 Ok, here's the scoop. Apparently Uncle Ed has something for me to see and read on the puter, so he asked if I could check my mail, lets go and see what it is all about ok? password is......ok here we are~at my mailbox.

umm umm Mom~~ a little privacy here, would ya?? Geezzz...she is so nosey sometimes!! I mean I don't look over her shoulder when she is reading her mail!!! 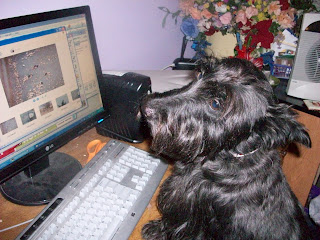 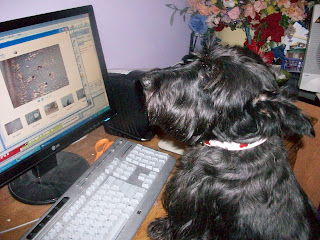 Uncle Ed says that he has these Blue Jays that they feed everyday. Uncle Ed puts food in the feeder tray and every morning they come and eat. Aren't they pretty?

Here is their food tray with their birdseed in it:

Well, turns out that something is eating the birds birdsead and so when the birds go there to eat, there is no seed, it is all gone. After a few days of this, the birds were getting pretty miffed about it. They both sat atop the evergreen tree and squawked at my Uncle Ed when he would come out of the house cuz there was no food in the food tray. They were both getting pretty hungry.

Can you believe this: A possum was eating the birds food. Look at the nose on this dude! He is pretty good size too~~Uncle Ed said when you get closer to the possum, he showed him his teeth. I don't imagine that he was too happy about being caught.

This possum sure looks mean to me, I sure wouldn't want to run into him late at night. So...my Uncle Ed, being the brave guy he is, took the cage with the possum and took him way out in the country and let him go.

Uncle Ed, said he took right off runnin..., Hopefully he found his way home to his possum family and then he would have quite the story to tell them where he has been that night. And....thank goodness, no possum got hurt in the making of this blog. Now, the Blue Jays are happily chirping again and eating their little hearts out!! That was an interesting e-mail from my Uncle Ed. Now for the best part he told me to save until the end.

He said he saw that I was hoping for some Hot Chocolate and so far Mom hasnt given me any, so he is sending me some in the mail. He said I can only use a smidgen once in awhile and not to tell Mom, or he would be in the dog house!!So....Ssshhhhh......Now, I will be watchin for "my" favorite mailman!!! WOW!! My daily dog biscuit from the mailman and soon a package too!! WhaaaHOO!!!

P.S. Speaking of packages: 3 more shopping days, Mailout day is December 15th. If any of you have recieved your packages already and have opened them, then post what all you got from your name ok?