I had a wonderful day yesterday. I was at Scotts (my groomer) place. I love to go see him. He brushes my furs all out without hurting me and I get washed, clipped, nails done and the whole 9 yards!! I smell so good and when I am done I gets to play with the other doggies that are there too. Sometimes, I am having so much fun that I hate to go home, awww just kidding, I am jumping and barking when Mom comes to pick me up!! Ha! I was pretty shaggy.
Heres the before: 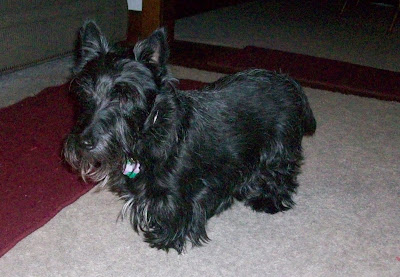 And the after: I am all snazzied up for Sweet William and the Valentine dance!! Mom loves the haircuts cuz she said she loves me nice soft fur. The munchkins like to sit and rub my back and I am not minding that one bit!! bol 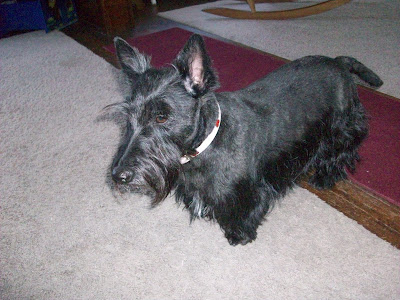 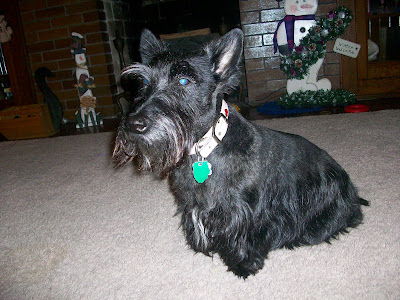 On the way home, we stopped at the fabric store. I had to wait in the car and Mom went in and found me the most cutest material for the Valentine dance!! It is SNAZZY!! She is working on it this weekend. I am picking up Sweet William in my vertable and so we will be getting it all washed up pretty quick too. I cant wait to see you all at the dance!!
Posted by Scooter at 1:57 PM 23 comments:

Look at me. See how shaggy I am? Well....not fur long. I am headed off to my most favorite hair cutting guy, Scott. He is really cool and I love getting haircuts so much that I give him lots of kisses while he is cutting me. But not to worry Sweet William, they are friendly kisses!!

I have to get all Snazzied up so I will be all beautiful for Sweet William for the Valentine dance.
See you all when I get home. Toodles!!
Posted by Scooter at 10:24 PM 21 comments:

Just cuz I sit in a chair up to the table, does that really constitute the word Begging? Seriously?
In fact, if you kept my food bowl full at ALL times, I might not hafta sit here and watch you. After all, you feed us twice a day, I see all you guys feeding your faces 87 times a day!! I am just really interested in what you are doing, is that really wrong? Cant a sweet Scottie take interest in my peep?? Just cuz I am interested in you~~by no means is that "Begging" 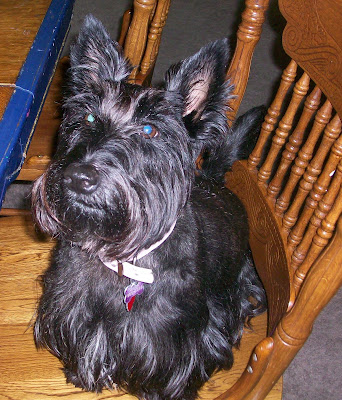 Lily is asking us names we call our peeps. Well, one that comes to mind right now as far as the foodables go is STINGY, Non Sharer, Selfish, you get the point?? BOL
Other names are Weirdo, Quirky, Flakey, Nuts, Camera crazy lady,
Posted by Scooter at 1:49 PM 24 comments:

We are getting even more snow today. I got my Snazzi Pink glasses on and drug my snowboard outta of hiding and I am ready to hit the slopes, and Shreddin' the Gnar (that's snowboard lingo for~I am going snow boarding) and I am gonna tear it up!!

I would like to introduce you to Uncle Ed's new cat. They saw this adorable cat sitting outside and it was just crying its poor little heart out. They went out and got him and put him in the garage. The next few days they went around and asked the neighbors if they were missing a cat and no one was. So they decided that the cat must be meant to be theirs. So now he has a new home at the Kansas farm. They got him all checked out with the cat DR and he is fine and all good to go. Apparently he likes to be everywhere and see everything that is going on so they named him Snoopy. Snoopy lives in Uncle Ed's garage and Snoopy loves it in there. He is catching mice like no bodies business, so they are happy bout that. So what do you think Madi? Isn't he a handsome guy and you and Snoopy can hang out this summer at Uncle Ed's place when we go for our cookout. 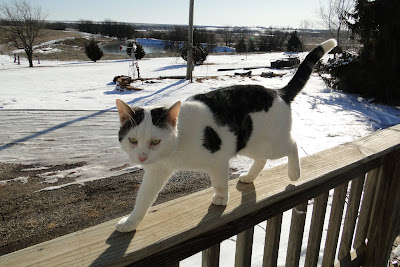 I did tell him about you Madi and how you are a Diva and all and well....he just got a little shy: 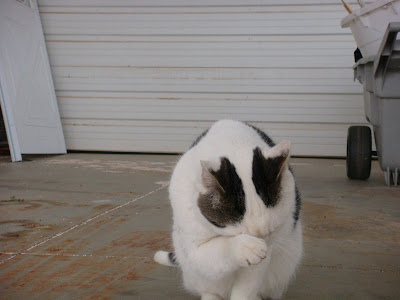 But....I think you both will hit it off just fine!! So Welcome Snoopy to Blogland, I am sure you will be seeing more of Snoopy in the days to come!!
Posted by Scooter at 8:35 AM 19 comments:

Let me ask~~How many times do I hafta nose this bowl around to get some food in here? Dont you know that my bowl should be full for when I am hungry?? 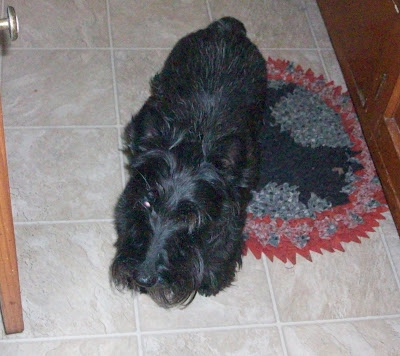 My peep is a Flake part 2

My peep is a Flake~~More flakiness!! She tends to sprain her ankle Alot. She can do it just stepping off a step or missing the bottom step or just plain walking. She has sprained it like 9 times already. Once she sprained the night before she was leaving to go to Texas to see her daughter, she missed the last step. She said NOTHING was stopping her from flying to Texas and nothing did. She got her crutches out and she got to ride in the fancy mancy wheel chair all around the airport and when she go to their apartment guess where they lived?? On the 2nd floor!! BOL and guess what the weather was like there? Rainy!! BOL But she went up and down them and did all the stuffs that they wanted to do!!

She also falls alot too:
Ex.1~~Once she was carrying her youngest daughter to the car and dad peep and the other kids were in the car. There was a small muddy spot and she found it and she started going haywire!! Arms were going everywhere and she was trying so hard not to fall but no luck and she fell right in the muddy spot but the baby didn't get any mud on her!! Everybody else in the car was literally cracking up cuz they said it was so funny to watch, BOL

Ex 2~~The peeps used to do paper routes and the snow and ice was almost gone. But she managed to find a small piece of ice, and yes, she went down. She hit the pavement so hard on her face that she gave herself a black eye!! BOL

Ex 3~~They were in Houston and went downtown by this waterfall thing and to some underground mall deal. Everyone was just walking along laddedy da and unbeknownst to Mom there was a small itty bitty spot of sauce of Soy sauce on the floor that someone spilled. Yes, you guess it, she found it!! That itty bitty spot landed her smack dab flat on that mall floor. When the family looked back and saw her splatted on the floor they cracked up again, saying What are you doing on the floor??

Ex 4~~Not to log ago, they were in San Antonio and went to the River Walk. Again everyone is going along and they look back and here she is again, gots herself hung up on a brick and on the ground AGAIN!! BOL
They have decided that they all need eyes in the back of their heads to watch out fur her. My mom peep is an American Indian and she has always had this problem, Her cousins gave her an Indian nickname of Limping Antelope when she was young and to this day they still call her that. BOL She about trips over Addy so much, especially when she sprawls out in the middle of the kitchen floor!! Me....I know to keep to the sides of the room!! BOL
Posted by Scooter at 10:22 AM 21 comments:

My peep is a Flake

My Mom is a flake!! You see for Christmas she asked for and got a big and heavy cast iron pan. She has had to learn some lessons from it like: After you have been cooking in it, you don't pick it up by the handles like the old ones!! DA!! It is.... lets say a tad HOT!! BOL
Well....she decided to cook pancakes in it. Not a good idea. It wasn't long and the whole kitchen was filled with smoke!! No matter how much she turned down the burners, the pancakes were still burning. She then says "Well......maybe I shouldn't... cook pancakes in this pan" do ya think?? The smoke was really getting bad and it looked like this inside the kitchen.

Immediately doors were opened etc. Now Kaleb came down the hallway, and stopped dead in his tracks. Then he said, "Grandma, I think I better drop low" and he did. He explained that he learned the Stop, Drop and Roll from Mr Fireman at preschool. Luckily he didn't start rolling on the floor, that would have been funny!! Now is this flaky or what?? This is what I have to deal with on a daily basis.

gee.....should I even mention the time that she put eggs on to boil and got on the puter? She heard some poppin and found exploded eggs all over the kitchen walls and ceiling. Dad was NOT amused by this situation!!

or....the time that the fondue pot exploded all over the dining room walls, ceiling and curtains!! I guess I should be happy that I am alive and that we still have a house left!! BOL
Posted by Scooter at 10:25 PM 30 comments:

This is Shelby. She lives in Englewood Colorado. She is Uncle Ed's grand dog. Would you LOOK at what her peeps gave her for Christmas!! I dont know bout you all but I think I want to trade my peeps in fur Shelby's peeps. Anyone else with me???