Any doggie up for a game of Beach Ball this weekend?? 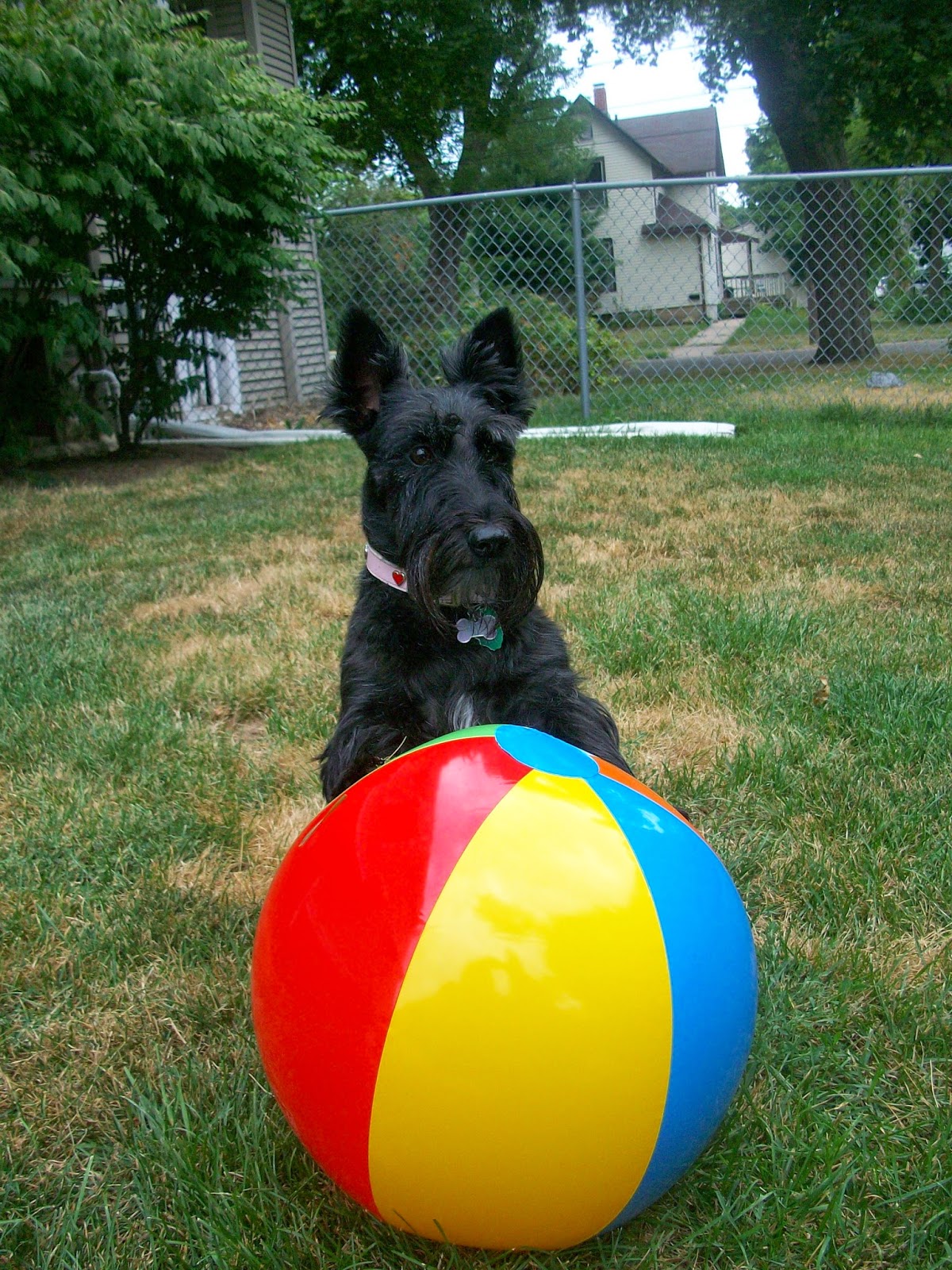 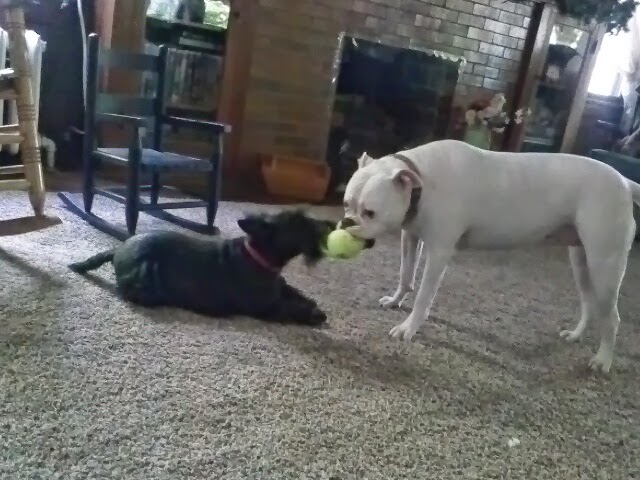 Me and Addi's photo shoot

The other day we were at Addi's house and Mom wanted to get pictures of us together. Nope Mom, neither one of us is going to look. 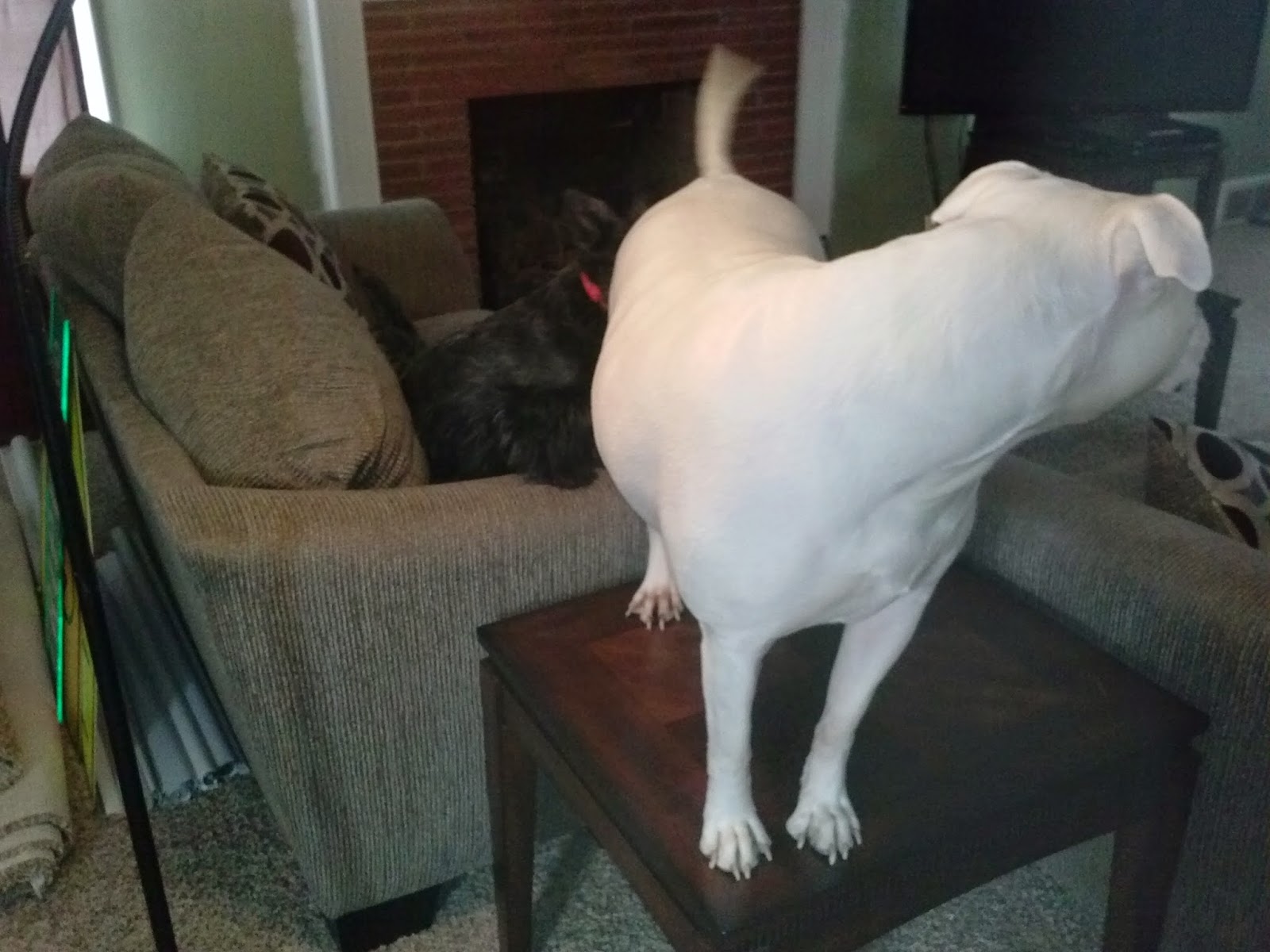 Ok Addi you look and I wont. 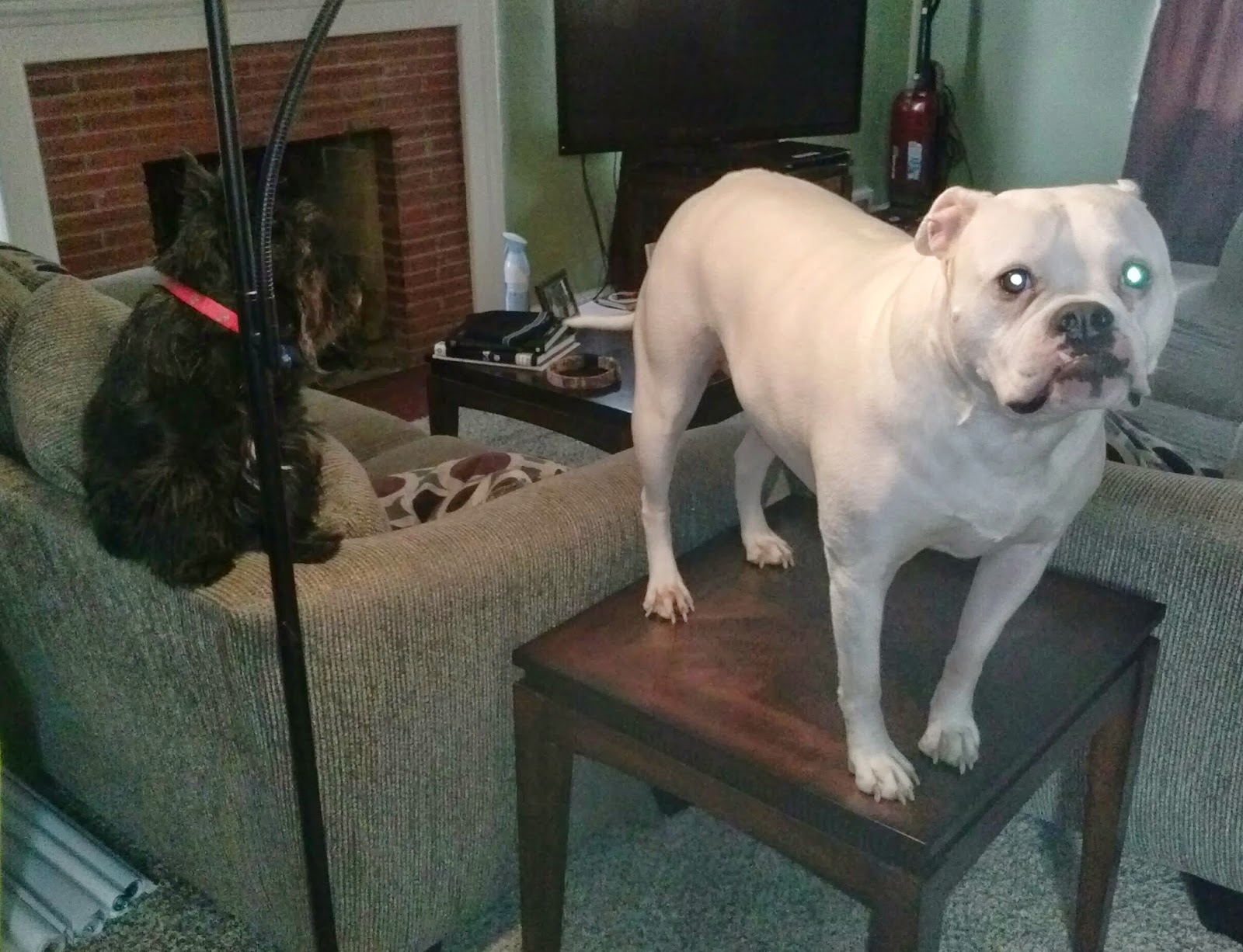 We looked up and down and all around, it was getting pretty funny.

Mom was getting a little annoyed so as not to push our luck too much we decided to appease her plus there was the word "Treat" involved, We can be persuaded!! Nice picture huh? 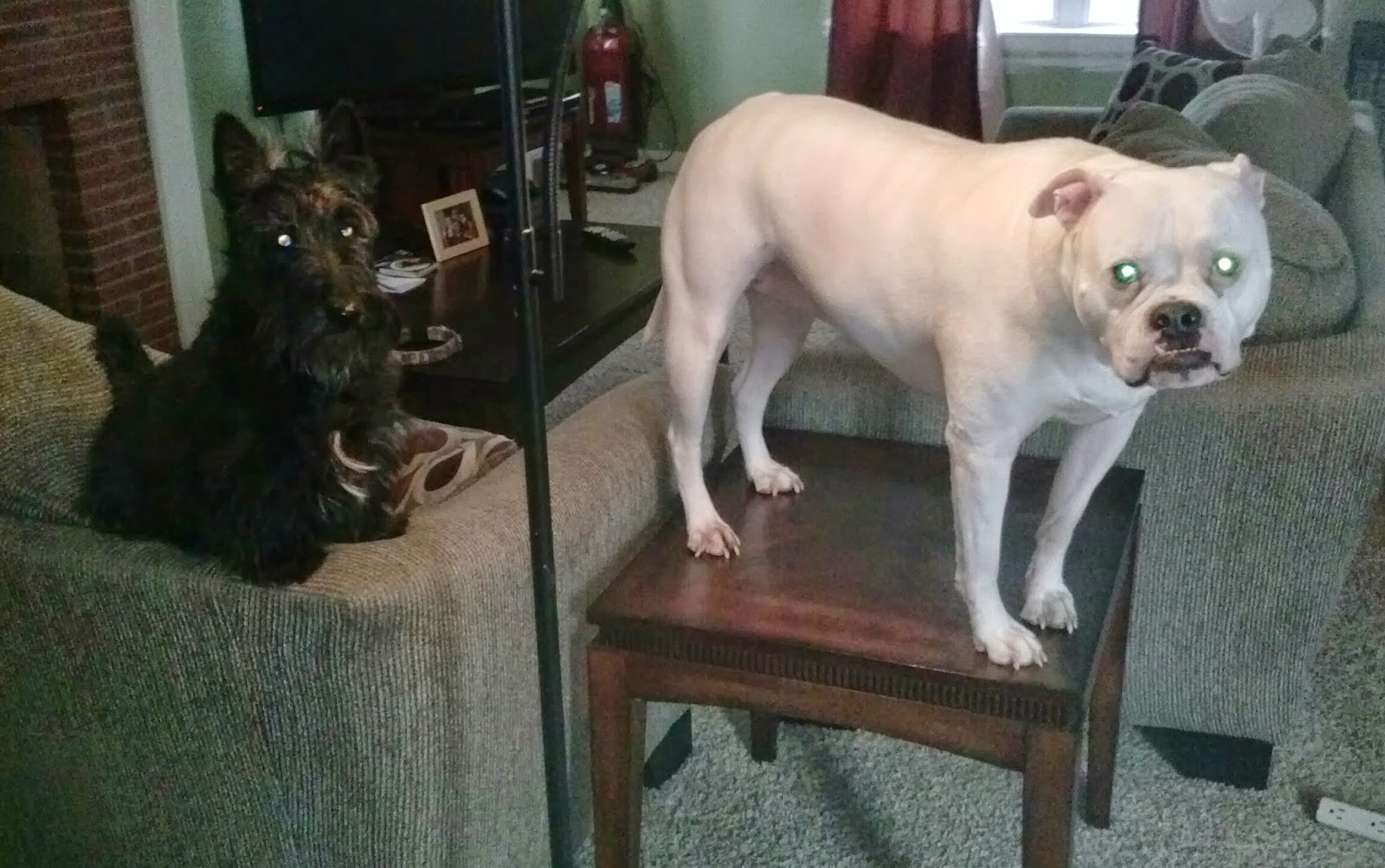 About Bertie being whisked off on Date night.

Bertie and Addi are made for each other. They LOVE the great outdoors, long walks and they both dont like clothes-they prefer the furs. Addi loves to hear his science talk and she isnt a foo foo girly girl. 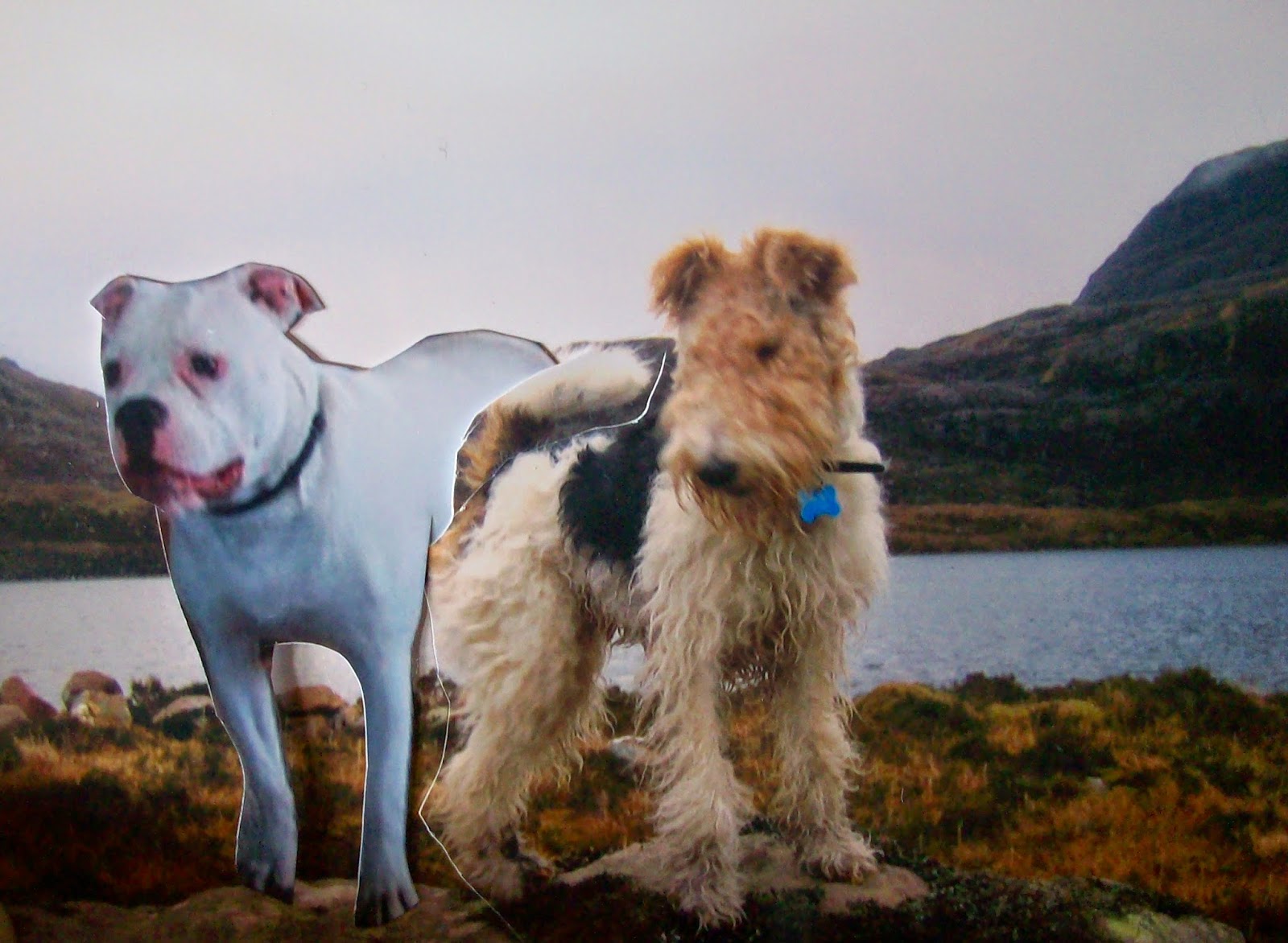 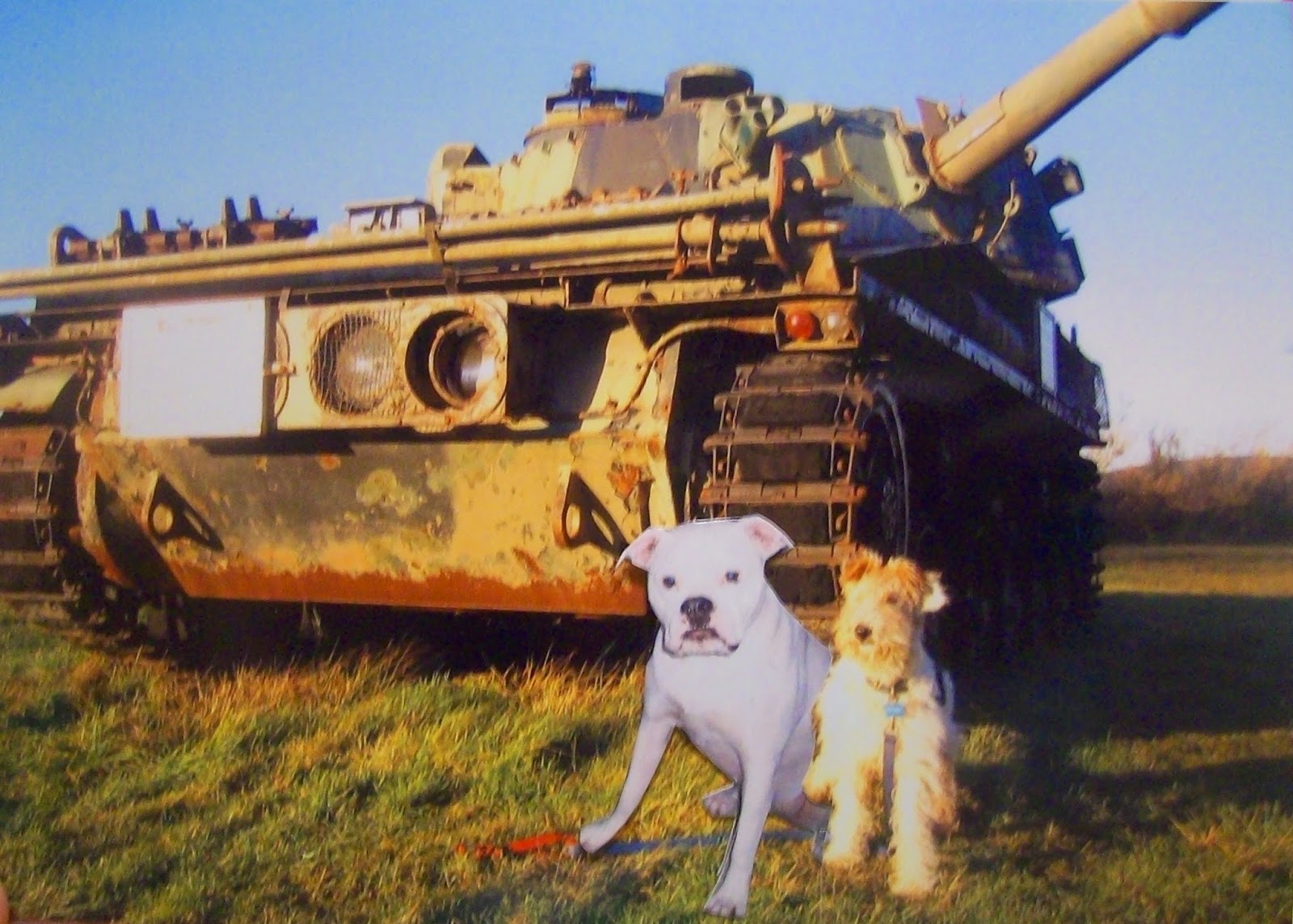 Addi is all about Bertie doing his thing in the Old green Tank, afterall..... she says that he is the smartest guy ever!! They do have just way too......much fun in the BIG ole green Tank, 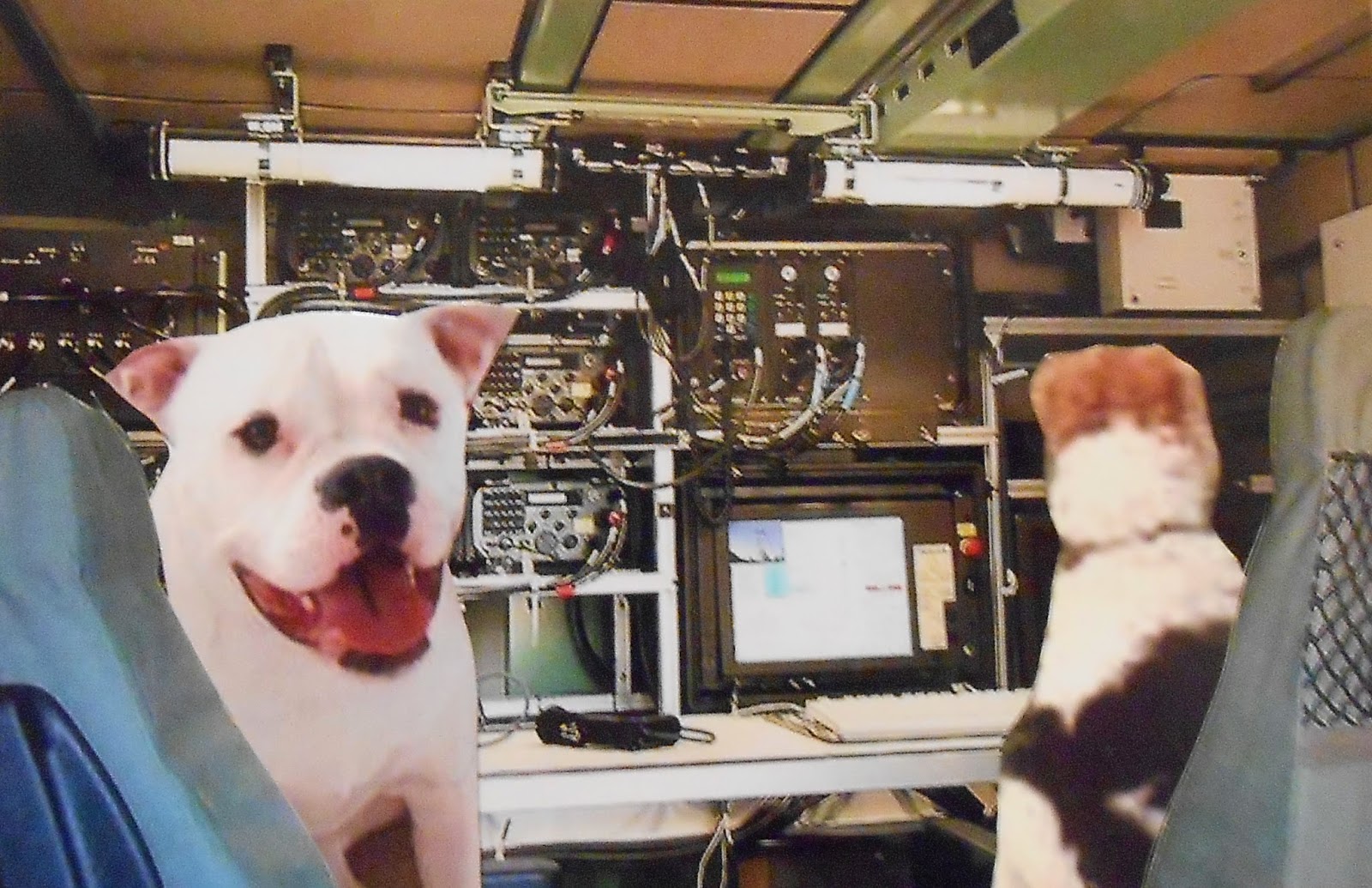 Bertie fires that baby up.. 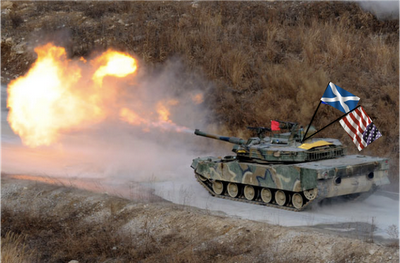 and well y'all remember the pumpkin patch dont ya? 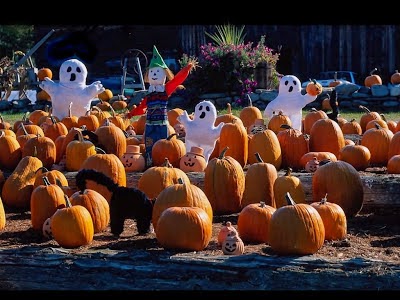 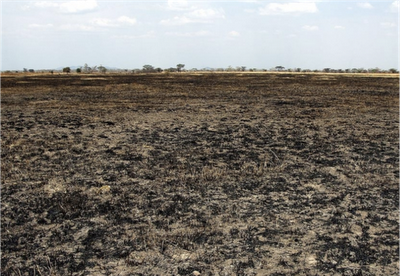 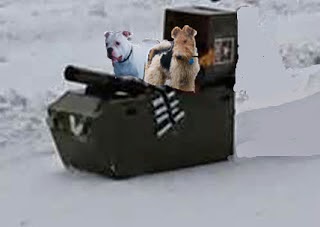 Addi is pretty snug and doesnt get all mushy gushy and when she heard that Finley, Charlie and Whitley
whisked Bertie off on date night she was fine. She knows that her and Bertie are Soul Dogs!!! It did make her Happy though that Bertie informed Finley that his heart belonged to Addi.

On Finley's blog this is what she wrote and I was just cracking up when I read it.

(Bertie informed me his heart belongs to Addi. Have you pups gotta a look at Addi? She looks like dat pit bull that chomped on da back of my neck while I wuz in my own front yard.... it wouldn't let go, and Daddy had to drop kick it offa me or I'd be toast. I wuz a'screamin' and Daddy knew it wuz tryin' to kill me, so he dropped kicked dat pit bull like he wuz scorin' da winnin' field goal! I digresses, but ya gets my drift of why I is skeered of a pup like Addi. While I do think Bertie is a real cutiepie, dere are a lot of fishes in da sea, and most of dem don't come with a great white shark attached!! If he prefers a gal whose breed is known fur bein' a gassy lassie, eatin' udder animals, and excessive droolin' instead of a cute lil scottish lassie from da highlands who he could go on varmint killin' expeditions with (notice I said varmints, not kitties or pups), well, there's no accountin' fur taste or da lack dereof....)

It is sooo true!! LOOK at that big mouth. When we play, no doubt that she could fit me right in that mouth. 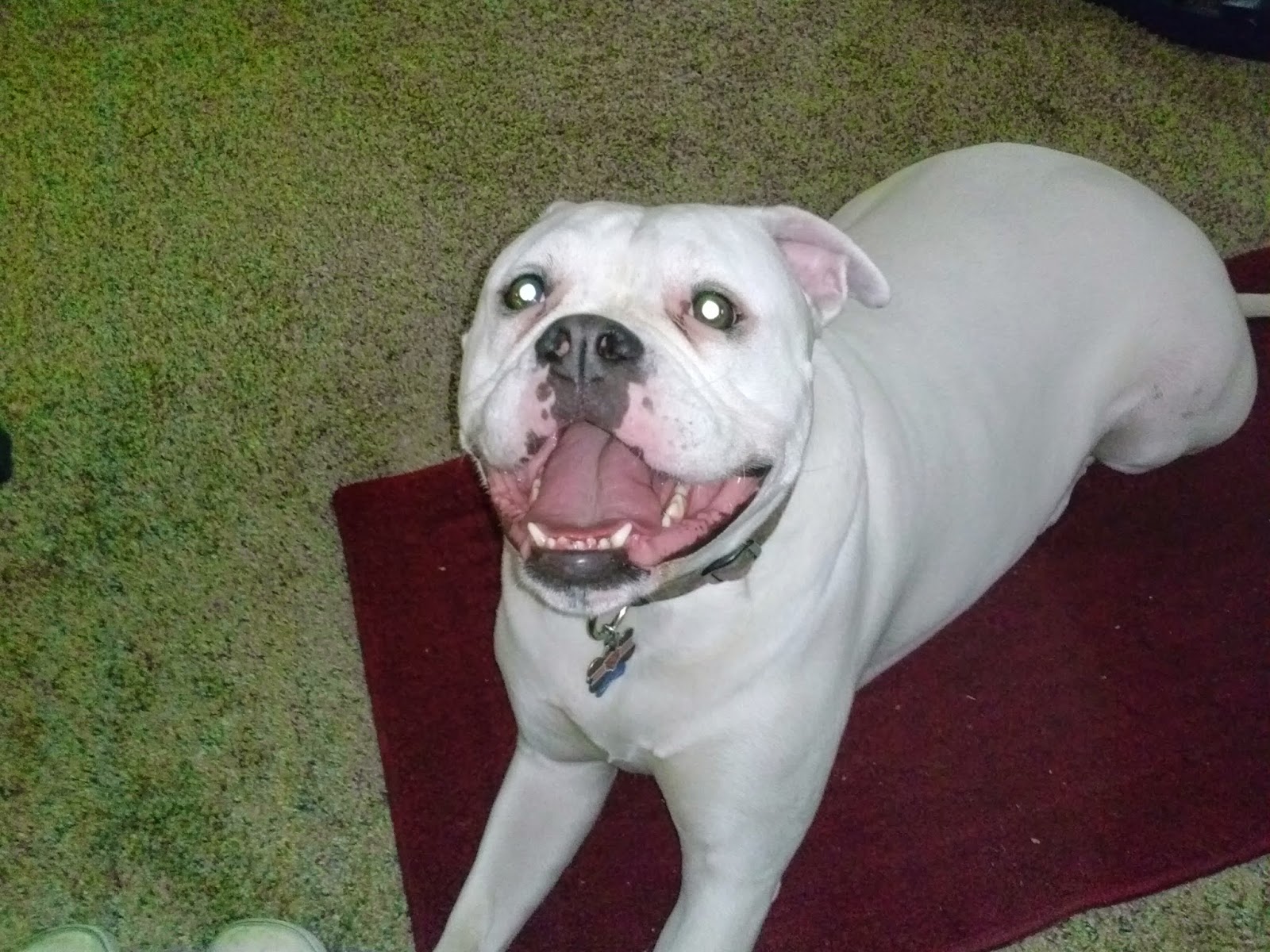 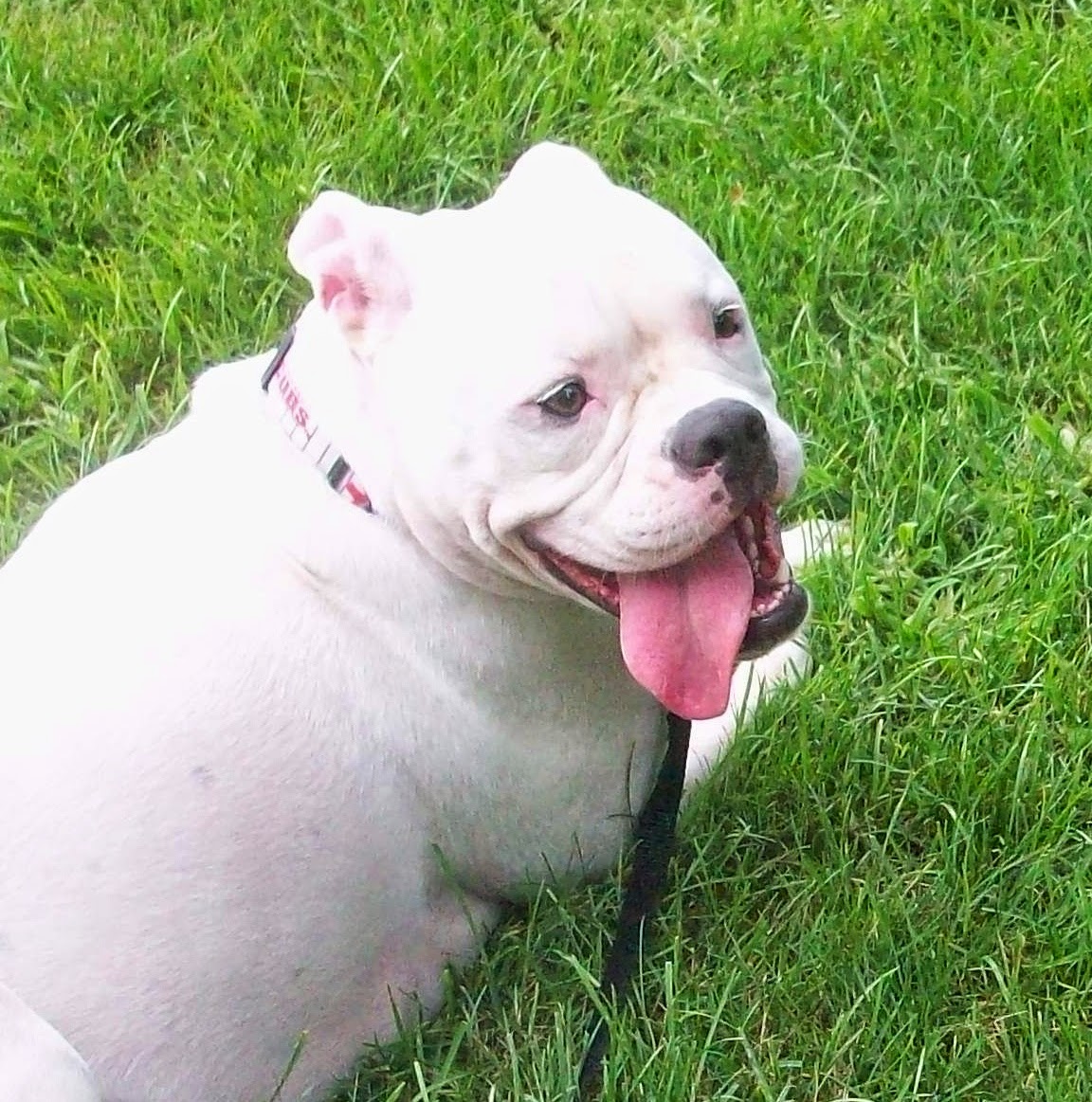 Gassy!! Yep, she can clear a room in like 87 mili-seconds. While I love to catch the varmits and bring them in, Addi wouldnt know what to do with it, she would probably jump and run for the hills!! bol
She is such a scaredy dog!!
But what really cracked me up SOo.....much was the Great White Shark name. Her color and huge size fits her perfectly. I have always called her Dog-zilla but now wondering if I should change that to the Great White Shark?? What do you all think??
While I do love Addi, I do like to give her a hard time and believe me she does the same to me!
So.....Dog-zilla or Great White Shark??
Bertie: You got your paws full with Addi. BOL
Posted by Scooter at 12:28 PM 26 comments:

Oh yeah, I love cherry pie!!! Yesterday was Addi's 4th Birthday but we are celebrating today since she is at my house for a few days.

Mom trying to get that perfect picture.

And while they are doing that I think that I will just help myself to a smidgen. Hehe 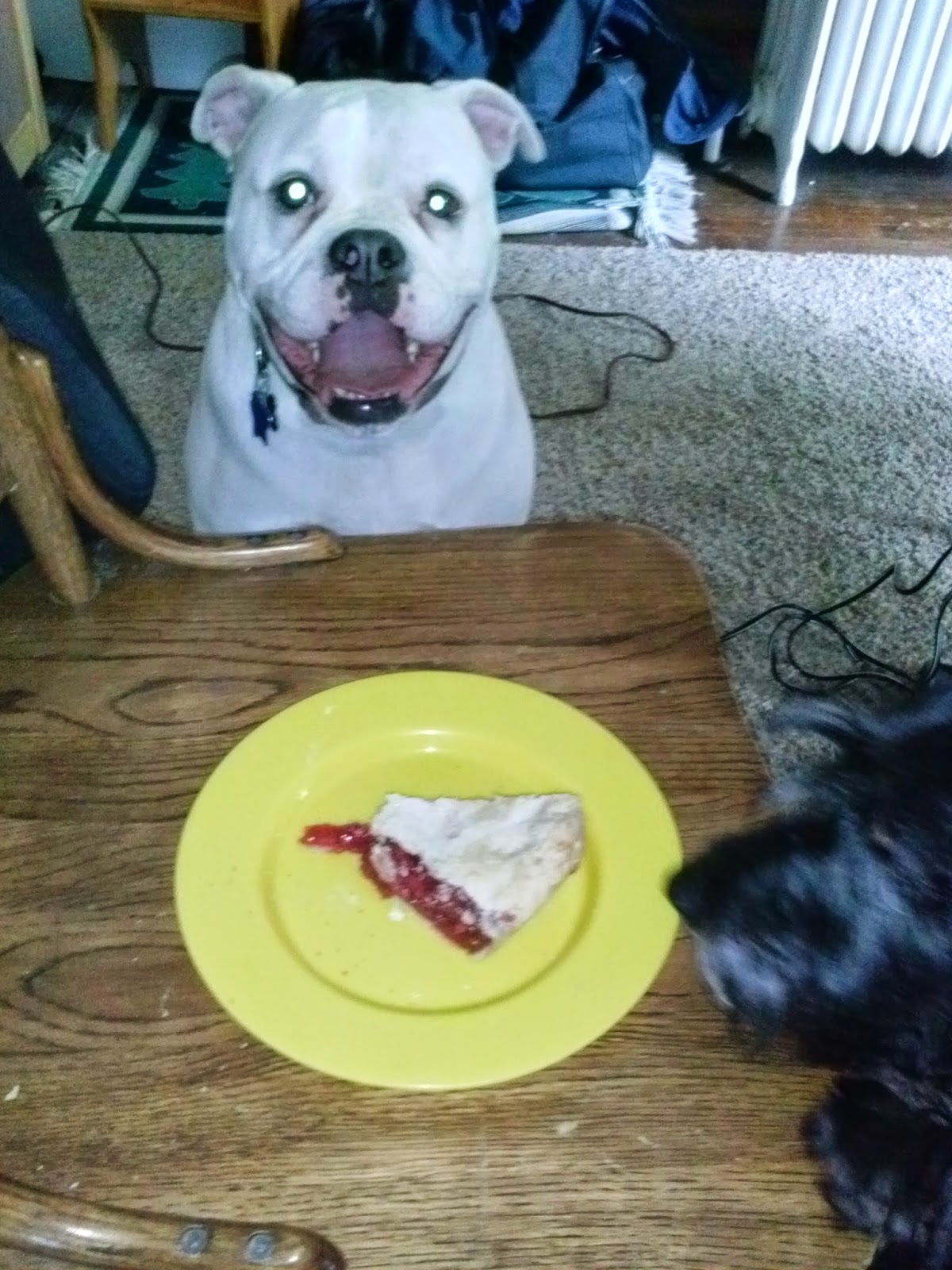 Awwww mom had other plans. We loved the smidge of pie. Happy Birthday Addi.

Be sure to come back tomorrow cuz I have something to discuss that is hilarious
Posted by Scooter at 1:07 PM 21 comments:

I am so excited to go on another great date with Sweet William. I am waiting for his phone call. The waiting is the hardest part ya know?? 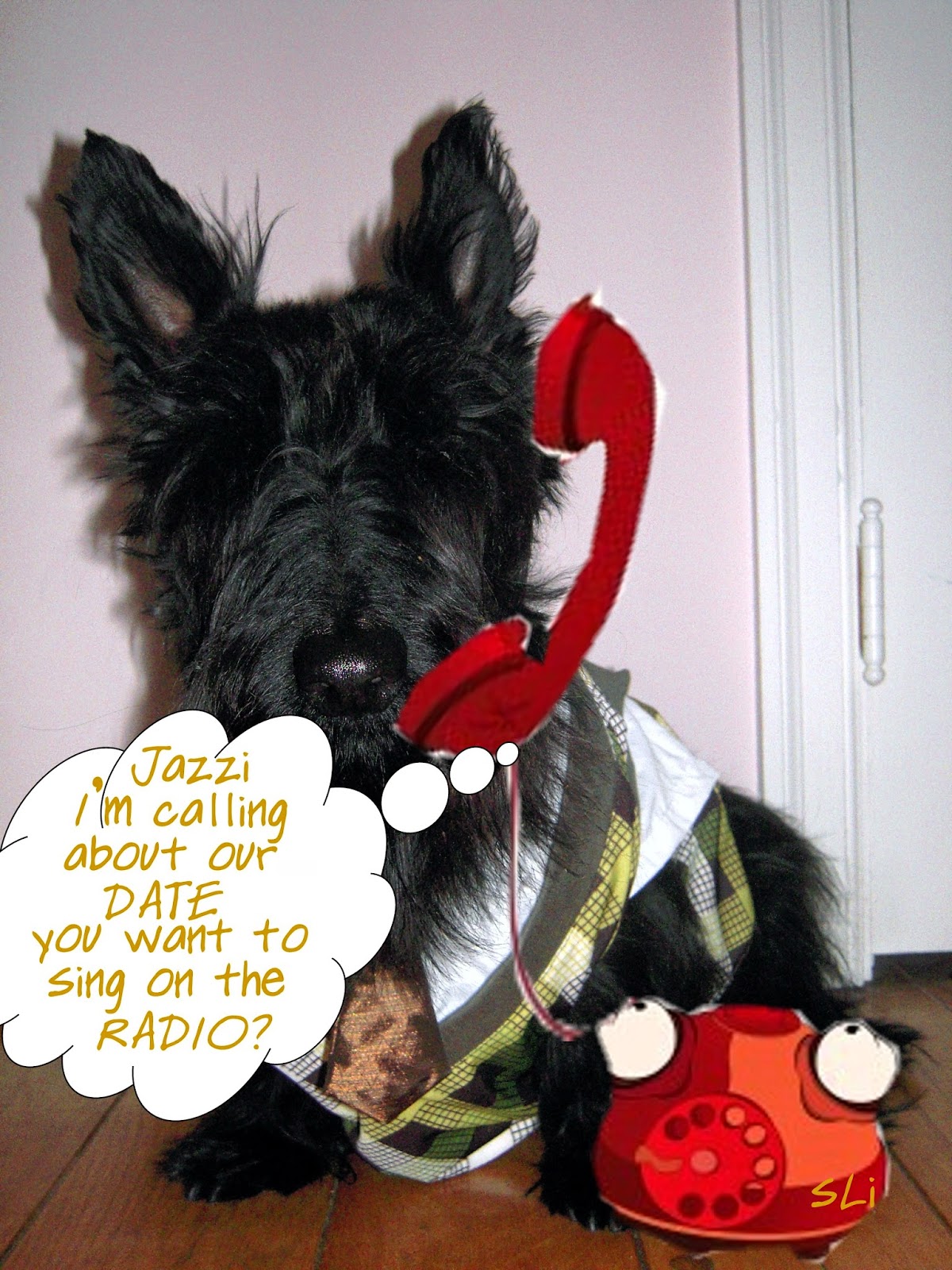 Sing on your radio station??? Are you kidding me? (Insert loud screaming howl)
I'd love to....la..la..la..  Oh boy this is gonna be so cool. 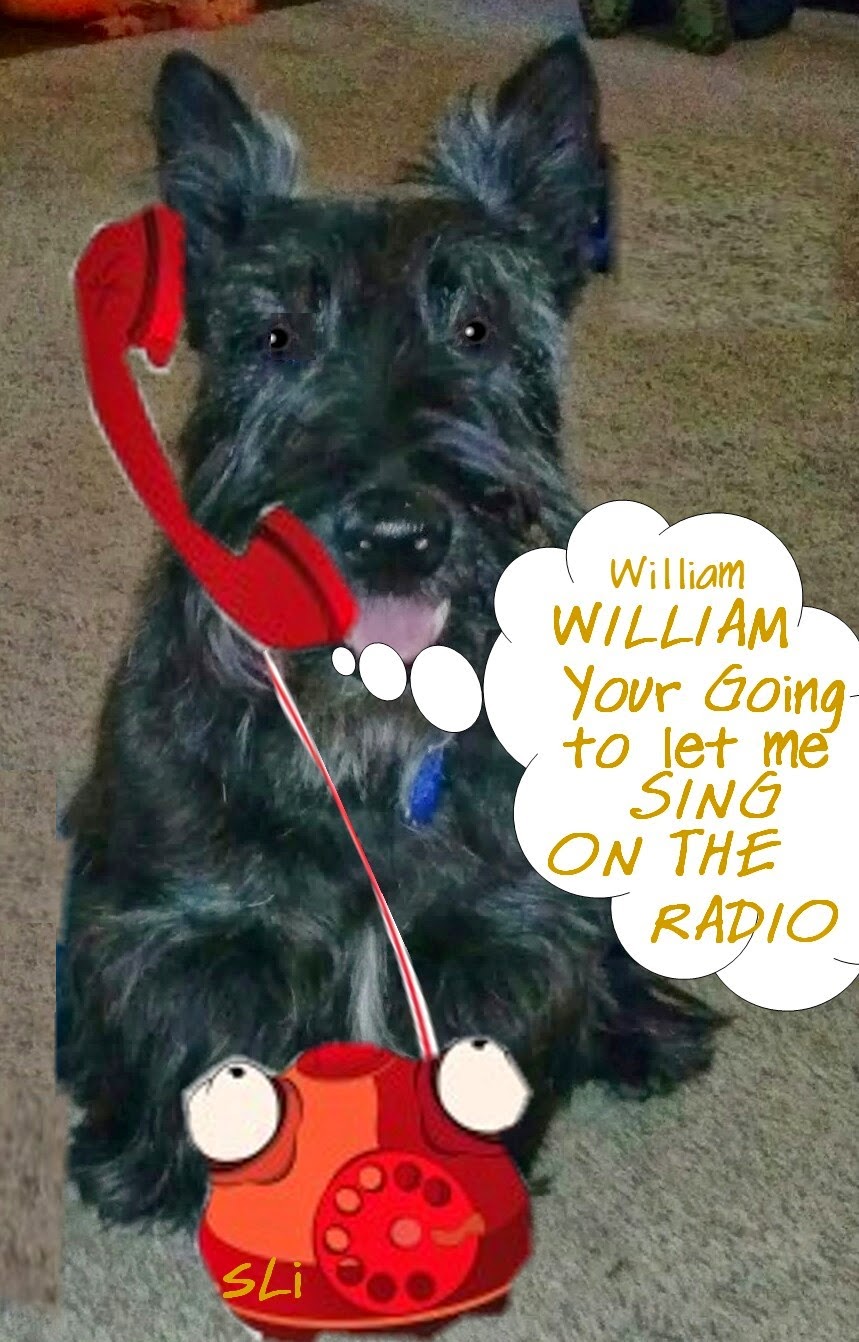 Then after that is all over guess where we are going??
Go ahead and try!!!
We are off to Universal studios to hear the auditions for next season of the Voice.
Wow!!!! This is gonna be magical.
To hear my song just click on
This....is....spectacular!!!!

As you all know, Sarges Date night is coming up. I'm going with my sweetie Sweet William. Of course I love to look my best for him, so mom got me in for my spa day with Scott. Scott is the best groomer in the whole wide world. I was shampoo-ed, nails done, haircut with "style". Gotta love the bubble baffs!!

I'm all spiffed up and ready to roll. 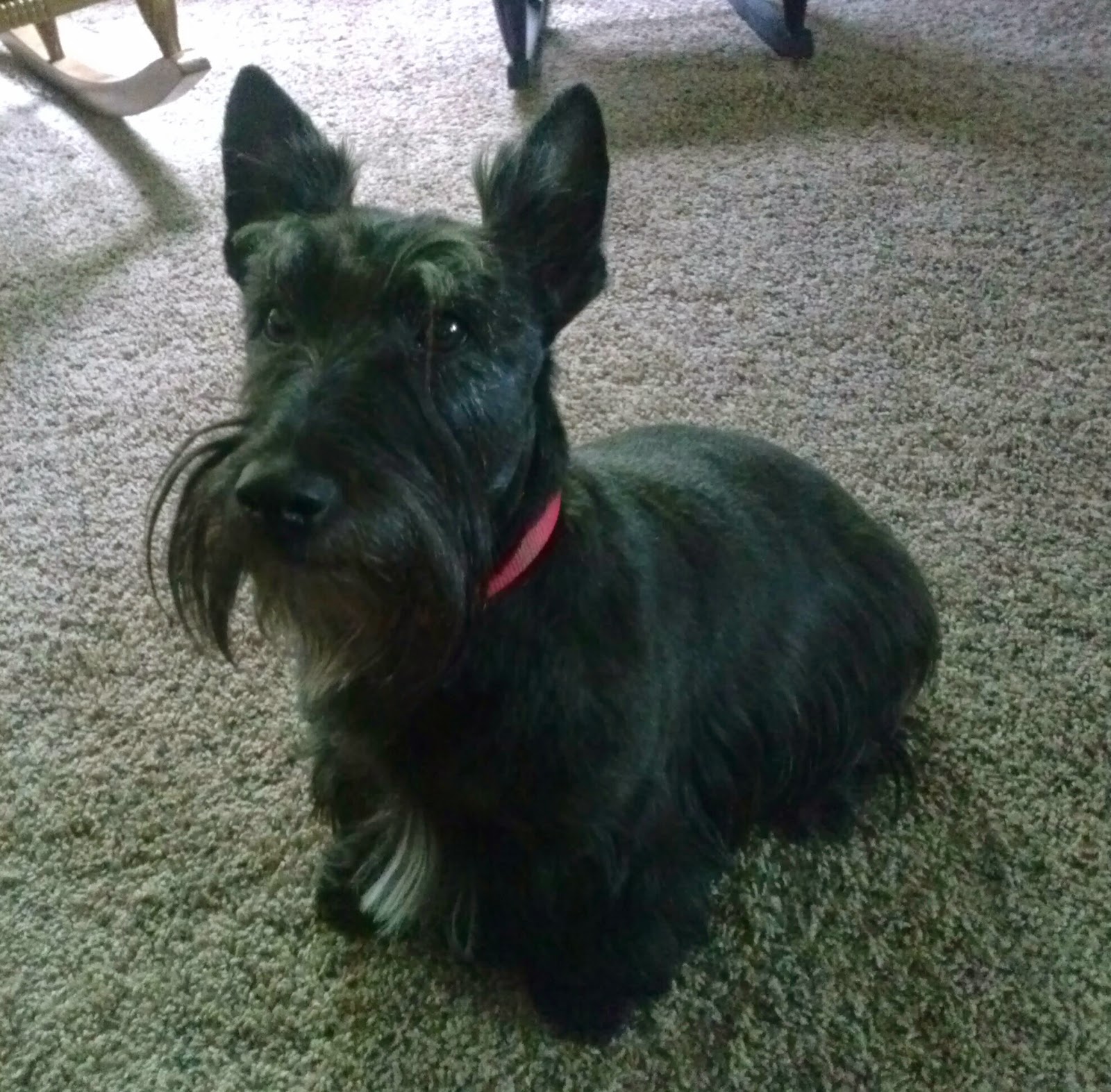 There are several Sweet Williams. When my mom was a kid she had this troll doll and his name was Sweet William. He used to have long hair but that was before her beauty operator stage. Guess its a good thing that it isnt her job right?

There are some really pretty flowers and they  are called Sweet Williams. I LOVE the shades of pink since I am a pink girl.

But no other Sweet William can ever compare to my Sweet William. Isn't he the most handsome guy ever? He's so dreamy and he's the best boyfriend ever. 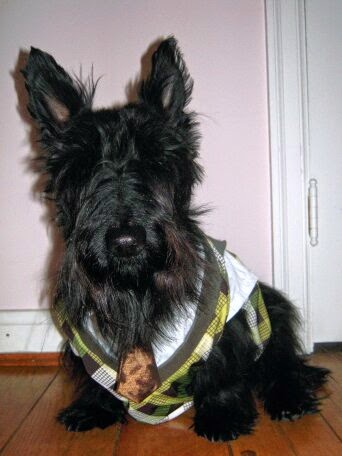 We just go together perfect, me and my Sweet William!!!