Finally after about 12 hrs, we got to Uncle Eds farm in Lindsborg, Kansas. I noticed right away that I was gonna have something to deal with here~~a BIG cat named Casper. I wanted to meet Casper~~but he wasn't the least bit friendly at all. He arched his back and hissed at me and then know what he did?? He popped me with his claw paw. I yelped like there was no tomorrow but do you think that I let that detoure me from wanting to get to know this cat named Casper?? NOPE!! And do you think he kept popping me?? Yep!! Each time, I got near him, he kept popping me and I kept yelping so finally they had to tie me up, so that I couldn't get near that cat. He wasn't as nice as you Madi!! 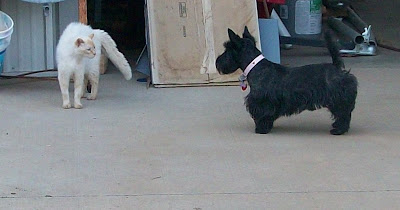 Uncle Ed has like 5 acres, so I could Zoom everywhere I wanted. There were so many smells to sniffs out. 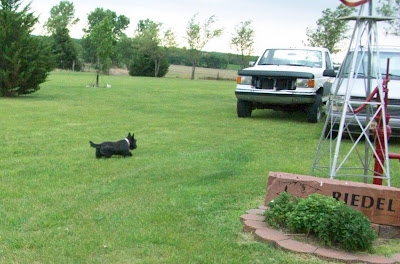 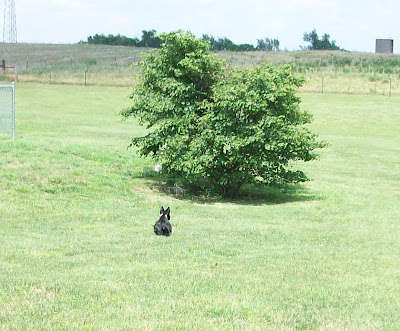 Uncle Ed fixed it so I could look out the window. He has bunnies, lots of birdies, ground squirrels and some scary ones like raccoons and possums and coyotes. 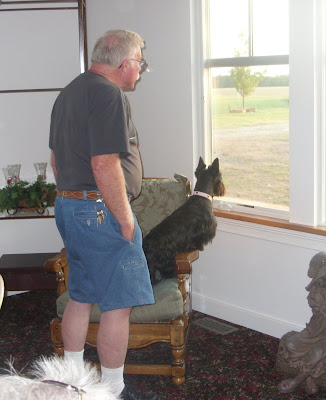 During the daytime, the kids got to have a tractor/lawn mower rides~~and my Mom and her sister were playing more on the tractors.

So....I decided that I needed to have my very own ride too. It was cool riding and letting my ears blow in the wind!! 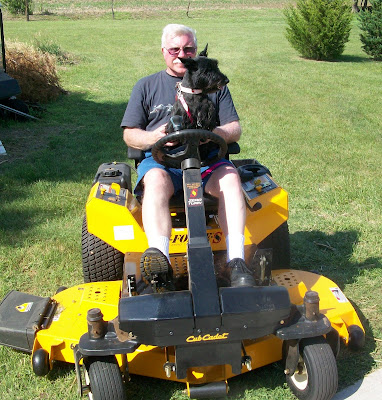 Come dinner time, they do it different in Kansas. They had what they called a wienie roast!! Cans you believe that?? Sorry bout that Frankie, but they just popped those dogs on a stick and actually cooked em. I wasn't too keen on getting close to that fire, it seemed HOT to me. I would just rather have had a Taco instead.

Then.....pretty soon, they were putting little white balls on the end of these sticks. Sometimes the white balls catch on fire and NO thanks, I don't do fire!! They were all happy and enjoying themselves and meanwhile I am searching for that darn cat AGAIN!!!

It was a fun day and it didnt take us long to zonk off that night. These humans do and eat strange things sometimes ya know?? But I guess if they had fun, thats what counts. Any of your peoples eat white balls off sticks??
Posted by Scooter at 5:21 PM 12 comments:
Newer Posts Older Posts Home
Subscribe to: Posts (Atom)