I am feeling much better today!!

WOW!! Thanks for all the Get Well wishes~~it is so nice to have fur-friends that care :-) I really appreciate you all. I got lots of sleep and am feeling much better. It was just a tummy bug, And...she gave me my doggie biscuit once I felt better. Mom says that she thinks it was really just a ploy to get all my blankies and my pillow washed~~Guess she will never know fur sure!! he..he..he!!

Yesterday and today, Mom was feeling a bit irritated and frustrated. I heard lots of talk and mutterings about some new governor guy raising taxes by 66% and she bout hit the roof!! She said this was gonna cost her an arm and a leg!! YIKES!! My mom is half American Indian so lets say she was on the warpath about it being done in the wee hours of the night, and just hours before some duck session was over!! Believe me with her mood, when I napped, I slept with one eye open!!

Then today she was all up in arms cuz she found out that this same guy did some more bad stuffs. For the guys leaving this duck thing, he was giving them government jobs and for the guys staying, he was giving them pork!! I am sitting here thinkin....ummmm...some pork sounds awful good to me, but apparently not this kind of pork, *sigh* and all this stuff was given away for votes!! She was going on and on and said right now she hates Illinois and wants to move to Texas where there is none of these state taxes!! I knew I had to do something to calm her down or she was gonna blow fur sure!! So I decided to play some spoons with her, she always likes that game. I got my Scottie mug and some treats and we were ready to roll!! 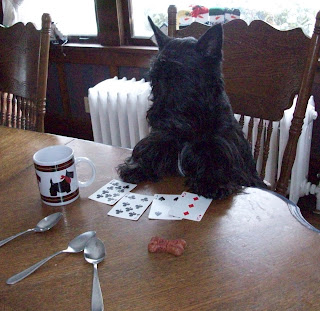 Here I am using my peripheral vision~~she thinks I am not looking but I have my eyes on her, I know just what she is doing. I could have whipped her really bad but I let her win some, so she would be in a better mood!! 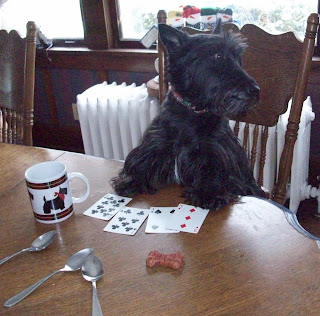 It was all working pretty good until tonight. She heard that these darn taxes start with her next check!! Arrrgggg~~These darn guys better Stop making her so irritated!! I am sure you other Illinois bloggers know just how we feel!! Ummmmm...What will do tomorrow???
Posted by Oreo at 1:18 AM