I did this same thing several months ago, and Mom wasn't as thrilled bout it as I was, because I brought it inside and Mom didn't see it and accidentally stepped on it and you should have heard her scream!! It was so funny!! She can't get mad at me for doin it cuz this is what I am meant to do and I have fun doing it~~do you all wonder what in the world I did??
Mom let me outside tonight and I was having lots of fun in the snow and what not. I didn't bark for awhile and I finally decided to bark to come in after I did this thing. So, Mom let me in and I brought it inside and I right away started throwing it around in the LR where she was, but she didn't notice right away cuz she was busy painting some bookends she is working on. She must have spotted it out the corner of her eye, so she asked me "What was I doing?"
"Huh..playing!" So she got up to see what I had and when she found out, I must admit she didn't spaz out, she was relatively calm and NO scream this time.
(Diana here) I got up to find that Jazzi had been playing with another dead mouse that she apparently caught outside and was more than happy to bring it in with her. I am glad she is a good mouser but I am not a big fan of bringing it inside!! I made her drop it and she was running round like a crazy woman and so I put her in her kennel so I could get rid of it. To me, these are just the yuckiest things, to her she is so proud of herself, so I didn't want to squash her pride. She is feeling pretty proud now, I didn't know if she could get through the door, HA! HA! Last time after I stepped on it and screamed there was no picture, so this time I decided to get a picture, so here is her pride and joy: 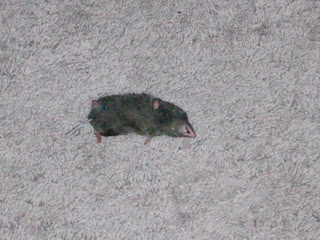 I am so glad that the grand kids were in bed already ha! but then they probably would have thought that this was soo cool!! Once I got rid of it, I asked her, I thought that this was one of her New Years Resolutions, not to bring it inside. She said Nope!! that rule # 3 was that if she got a pesty squirrel, that she wouldn't drag it inside!! So nice of her huh?? I think she is part cat!! Madi would be proud of her for sure!!
(Jazzi back) So what do you guys all think of my catch? Am I the coolest or what?? And who knew with the snow, that there would be a mouse outside? I tried to xplain to Mom, that I was trying to keep him from getting in alive and then really scaring her!!
~~~Oh.... a note to all of you east of IL. It is snowing here and we are to get like 8-10 inches so Frankie, Brutus get ready...the snow is coming right to you!!! Hey, you can't say I never gave you anything!! HA!
Posted by Oreo at 12:29 AM