As you all know, my Uncle Ed (my favorist uncle btw) came to see us for Thanksgiving. He lets me do things that I am not pose to do like...get up to the table, and he feeds me, etc.
While he was cutting the turkey, he was giving me pieces but shhhh.. mom doesnt know that part. Uncle Ed and I were at the Thanksgiving table, just for dessert only though. 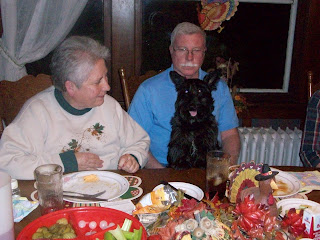 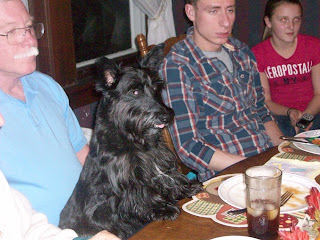 One day when they were out shopping, he bought me some organic pumpkin doggie treats that were shaped like teddy bears. I got to have those when they were having dessert. They were so yummy that Kaleb thought he would have some too!! I am like Wait a Minute, those are MINE!!! So Mom tried to get it from him but....too late, he already ate it!!! Geezzzz.....Kids!! But it didnt kill him, he is still alive ha! ha!

Uncle Ed and I laid around on the couch together and just chilled....it was nice and relaxing....Thanksgiving... 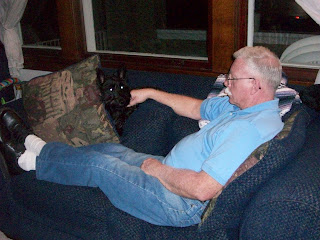 Uncle Ed also took me for walks in the morning. We saw the neighbor dog Molly (remember the snobby westie?) she just barked at me~~and I just walked proudly with my Uncle Ed in front of her ;-) We saw lots of other stuff on our walk too and it was alot of fun with him. 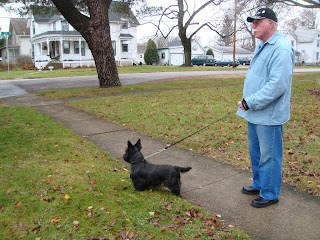 I have been trying to keep those pesty squirrels away and I was pretty proud of myself cuz they seemed like they were all staying away from my house. We were almost done with the walk and I could see my house across the street... 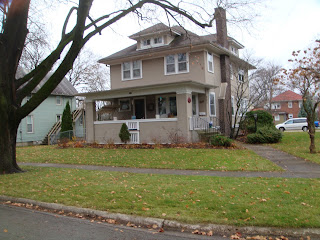 and I couldnt believe what I saw when I took a second look....The Pesty squirrel was just SITTING on the top of my house!!! Darn squirrel!! I mean it is different if it is in the trees...or in the yard...or the neighbors house...but my own very house!! Well, I just had to scare that sucker right out of here and he is gone now!!! MAN!! give them an inch and they take a mile!!! 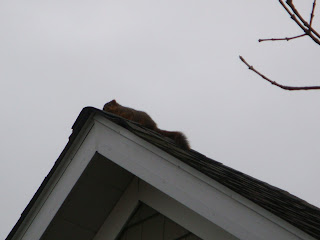 Uncle Ed finally had to load up the white van and go home and I miss him already.

But next summer we get to go to his house in Kansas and from what I hear, he has 5 acres and some neighbor cows and a cat to annoy!! Sure sounds like fun to me!!
Posted by Oreo at 1:05 PM