Since Mom got all caught up with that dumb tree rat...some of you have asked.... How did Miss Kyla do at the game last Friday?
Well....they won 15-5!!
Mom says that it was very exciting. That meant that their team was going to the championship game the next day on Saturday. Of course...Mom couldn't go due to her bum sprained ankle.

Apparently the game was a real paw biter. One team would be up and just like that 1, 2, 3 strikes next team up and another 1, 2, 3 strikes and next team back up again. There were a few runs in but not many. This was Kyla's 2nd year of playing softball and she is in the 6th grade.
The score was 5-2 in favor of Kyla's team. The other team had 2 outs and their bases loaded. Kyla was in the out field and the other team was up to bat. The girl swung and hit the ball and it went flying way.... in the air right out to Kyla. Now she isn't that good at catching fly balls but know what??
She caught it!!!
The crowd rose to their feet cheering and yelling....apparently it was something else!!
They had WON the game and Kyla was so shocked and happy that she caught the ball. She won the game cuz had she missed it, it would have rolled way out in the field and all their runners would have gotten home safely.
Kyla said  that my Mom would have been proud but my Mom is proud of the grand peeps all of the time. he he
Here is Kyla with her trophy and her team. 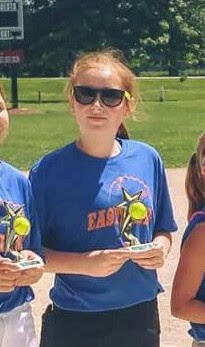 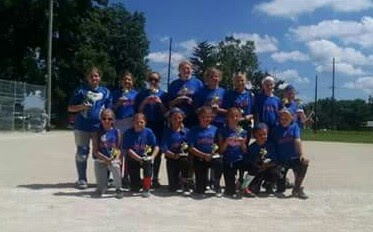 CONGRATS to Kyla and her team. They had a awesome season.
Posted by Oreo at 2:26 AM