The need to brag

I am just so excited that I hafta kinda brag.When we got Oreo in November, he was scared and missing his family so much that he had separation anxiety. We had a therapist guy come in and help us cuz he was pooping, making himself sick, barking and scratching at the doors. He gave us a plan to put Oreo in a kennel covered up when we leave and showed us how to get him not to bark. Oreo had never been in a kennel before so it was teaching him something new to a 5 yr old. We would give him a Kong with treats and that should keep him busy for about 45 min and then they just relax.  He taught us basic training tools which we began right away.

With the plan, he'd be covered up until the end of the Dec,
Then for Jan. we would uncover the front of the kennel.
Feb. uncover the whole kennel.
March move him out in a contained area.
April he should be able to be out in the open while we are gone with no barking.
So we kept him covered in Dec and gave him his Kong that kept him busy and he still barked sometimes. So in Jan. I uncovered the front of the kennel and he did great and wasn't barking. I noticed that he wasn't getting the treats out of the Kong until after we got home, so that meant he was keeping quiet without the Kong. This past week or so he hasn't wanted to go into the kennel so we tried him out and left him out in the room. I sneak out very quietly while he is eating his food and I leave him his Kong still and he has been quiet and has not woken up my husband who sleeps during the daytime. I put down doggie pads and he has gone on them so I am just thrilled to death. We didn't think we would be like this until April, so the end of Jan and I guess he is getting the hang of it.

In the beginning, there were times that I thought that this is never going to work and wondered if I made a mistake. He is really a good boy and he loves all the grand kids and I have let him sleep with them when they sleep over. I cant say he loves Addi yet but they manage to get along pretty good. I still don't leave them unattended just yet.

Oreo knows the Sit, Stay, Down, Off, Come, Bed, No, and working on Heal commands. So I am just really proud of Oreo and he has fit right into our family. He loves his toys and rolls around on the floor. Wed. he came in from outside and actually ran zoomies around the table just like Jazzi used to do, I've never seen him do that before cuz he is such a laid back guy. Its nice to see him Happy and that makes me Happy.

Now on another note, Uncle Ed sent a picture of some of his cards that he got for Christmas. He did receive quite a few and he wants to give a BIG Thanks to all of you that sent cards. Jazzi just loved her Uncle Ed and I am sure that Oreo will too when he meets him. So Thanks for remembering Jazzi's Uncle Ed. The cards meant a lot to him. 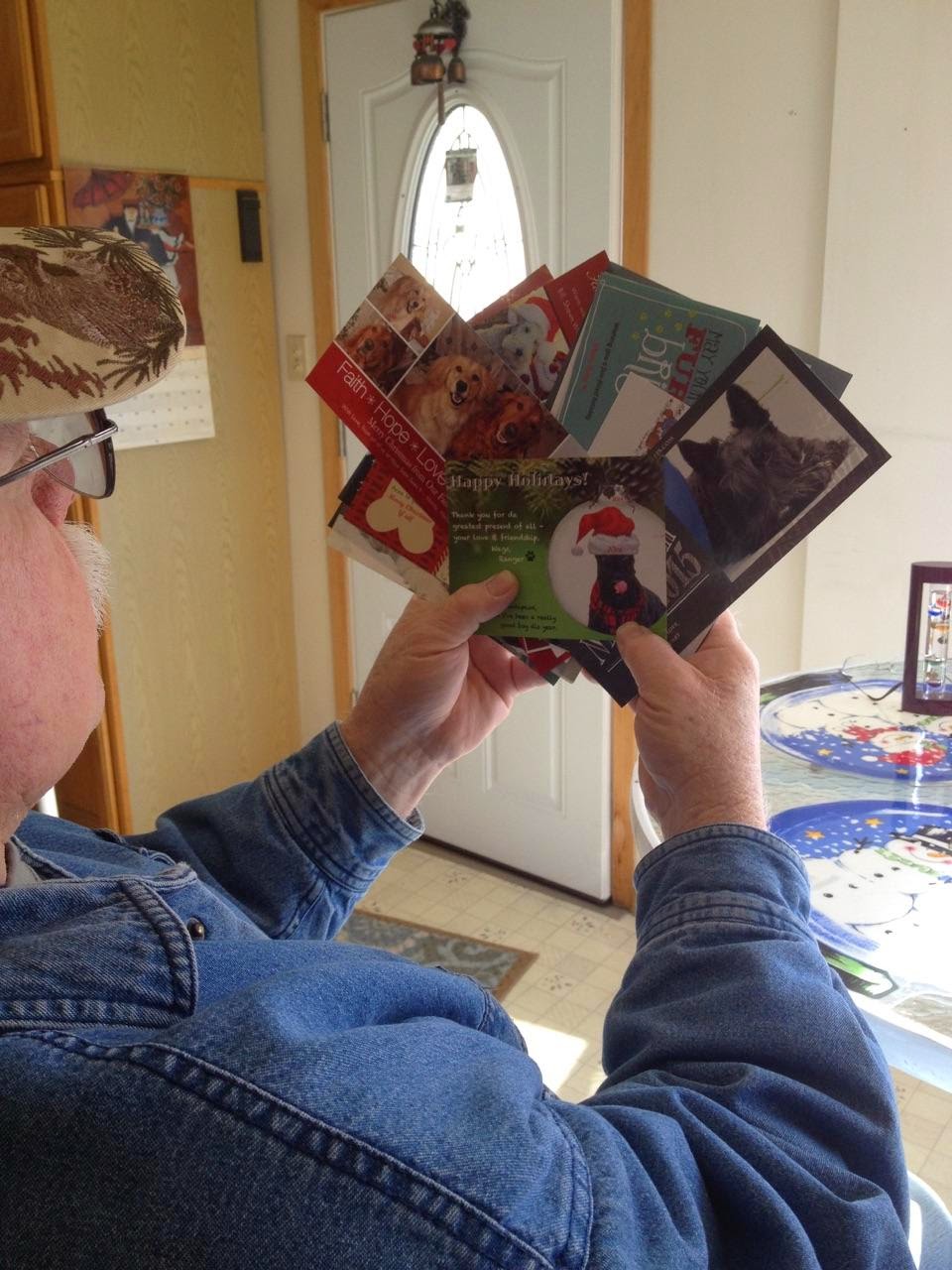